I just went into the bathroom and found the small garbage can there overflowing with the plastic covering from some of my husband’s dry-cleaning.  Ok, so maybe that doesn’t sound like the biggest issue in the world, but the garbage piling up is just the tip of the iceberg when it comes to the very serious ailment that my husband and kids have, “IENDOINM” syndrome. So very sad…maybe members of your family have it, too… 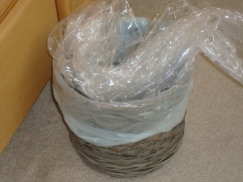 It isn’t just that my husband threw more garbage in a garbage can that was already full…but he just tossed it there, overflowing onto the floor, knowing that the “next person” would have to deal with it (aka: “me“).

Who does that? Either dump the garbage, or at least shove the plastic covering down well into the garbage can.

How hard can that be?

So I am left to wonder, is he that lazy?

Or does he have the often seen IENDOINM syndrome?

IENDOINM strikes millions each year. There is no known cure.

I think it is the syndrome, a frontal cortex processing flaw found in many men.

And unfortunately, there is no known cure.

The affliction is the dreaded, “It’s Either Not Dirty Or It’s Not Mine” syndrome, and the men in my life all seem to suffer from the syndrome, so clearly there must be a genetic link.

Luckily, a diagnosis can be easily made.

People afflicted with this disorder are the same ones who walk up and down the stairs dozens of times a day yet seemingly have never seen the piles of clean laundry stacked up at the bottom. Well, let me correct what I just said. They haven’t seen the piles of clean laundry THAT AREN’T THEIR CLOTHES. Once in a blue moon (and they are probably out of underwear by then, so it may be a literal moon that they are showing when they come down to pick up a pair of shorts) they will dash downstairs, root through the piles and pluck out a few things that are theirs.

I actually left the clean laundry piled up for over a week once, and do you know that my youngest son kept coming down and taking out clean clothes, one day’s worth at a time!!! Who does that? Well, clearly he is afflicted with IENDOINM.

Look around and you can see multiple signs of this terrible affliction. The dirty toilet seat that isn’t dirty, according to the men who live in my house. The dirty hand-prints on the fridge (and in the fridge) that also don’t exist in their eyes; that frontal cortex processing flaw blinding them to the dirt. Ask someone to dust and you will see a few weak-spirited strokes across the tops of tables, carved deep in the dust. Ask the person to re-dust and they will look at you as if you were the devil expecting the fires of hell to be extinguished…!

I complain about everyone leaving a sink full of dirty dishes…and then, a miracle sometimes actually does occur. Someone will do THEIR single dish, usually with great fanfare (what, do they expect a gold star?)…but that individual would never think to clean anyone else’s dirty dishes…I’ve actually seen them study the cutlery in the sink, trying to establish which fork they used if I tell them they have to clean up their mess.

And forget having any of the patients in my home afflicted with IENDOIMN deal with the cat litter box. If I were to die, those spoiled cats would have to toughen up and get a grip…I sincerely hope the cats will be able to figure out how to use the toilet vs the box…I don’t think anyone would even notice if the cats “missed” the toilet every now and then. Although the cats themselves might be mortified at what they find in and around that toilet. Ugh. I try not to go into my sons’ bathroom anymore…when I do, believe me, I am well-protected with gloves, advanced chemicals and other protective measures.

I love my family and know it can’t possibly be their fault…right? It has to be a brain defect because I have tried literally everything to get them to see the dirt and clean or help with something that isn’t “theirs”.  A mom simply can’t adjust the frontal cortex of a husband or son. All one can do is learn to live with it!

So over time, I have tried to adapt. The house is just a lot dirtier than I’d like. And I do more of the cleaning than I’d like. But I’ve stopped complaining. It doesn’t do any good.

But once in a while I get some satisfaction in seeing the girls my sons bring home discovering my sons’ serious affliction. A girl may have to use a dirty toilet (ugh!) or be served a meal on a sticky table (ugh!) or….just UGH!  From the end of the hall I hear a female voice just joking at first, then the tone becomes less forgiving..and then the complaining occurs. The girls sound a lot like I used to before I gave up to the disease. Maybe there is hope for my sons after all. Maybe their frontal cortex can still be saved, and maybe it will just take a prettier face than mine to make that happen!