Linguistics experts will provide one explanation relating to the origins of the word, “menopause”. Their root analysis will have to do with the “end of fertility in a woman” or something equally simplistic. Those linguistics experts must all be men. There is nothing simplistic about the menopausal experience, and I am 100% convinced that the term, “menopause”, really originated from the root term, “Men Pause”… because that is what they do when confronted with their wife (or significant other’s) symptoms…

What do you think?

I’m sure there are a few men out there who actually do have the capacity to sympathize with the middle-aged women in their lives… perhaps running to turn on the air conditioner or providing a cold glass of water at just the right moment.

My husband wasn’t one of them.

His approach in life is more, “What you don’t acknowledge doesn’t really exist, right?” So I could flash away and he wouldn’t flinch. Ever.

Some of my menopausal friends, though, have husbands who really seem to WANT to help or understand, maybe even engage with them when they are “experiencing symptoms”. But something usually stops them from being successful in their intent, because they PAUSE in their tracks. Is it that they fundamentally don’t know WHAT to do? Or is it something more? Is there something just taboo about a man trying to relate to a female issue involving blood, hormones and sexual reproductive organs?

Or is it as simple as fear. My vote is fear.

Jekyll or Hyde? Dare you try and find out?

A man dealing with a menopausal woman never knows who he will meet that day, Jekyll or Hyde. And the personality he meets at any given moment may not be there the next.

Many women (not all, so please don’t rage on me if you are one of the few who isn’t or wasn’t!) are seemingly bi-polar during this time, swinging from mood to mood.

With mood swings in full force, women are a force to be feared. In our discomfort over our hot flashes, our tempers are quick to flare. As our sleep deprived selves grow more irritable, we lash out at those “little” things that have never bothered us before. I remember my husband’s snoring, usually not bothersome…but when you are STILL awake at 3 in the morning, listening to the tiniest of snores, you can seemingly go crazy. I’d stare at him, furious. Not sure if I was more annoyed that he was sound asleep or that his snoring was keeping me awake (which it really, truthfully, wasn’t). 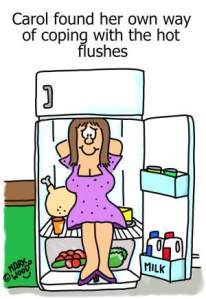 A friend of mine once told me about trying to explain a hot flash to her husband. It is like trying to explain the female orgasm, or child labor pain, or that wonderful “milk letting down” moment during breast-feeding. Meaning, you can’t really explain it to a man. But she tried. And the more she tried, and the more he seemed to downplay hot flashes as not sounding that bad…the angrier she got…and then the crying began.

Finally, men pause because they don’t know what to say in most interactions with a menopausal woman. They PAUSE a split second before saying “yes” or “no”, hoping in that split second delay they will get some sign, some small sense, of which answer will not be met with rejection and despair. When their mate asks if their make-up is on too heavy…what is the correct answer? Is there a correct answer? No. Oh, it is scary the questions men must maneuver during this time.

Did any of you see the Sherlock Holmes movies with Robert Downey, Jr. In them, he often is freeze-framed, while projecting out a series of future events (in his mind)…then when he has plotted out a course of action, and understands the consequences, he implements the action (all happening in a split second). Well, that is what “Men Pausing” is, men freeze-framed…thinking through a series of future events. Is the make-up too heavy or not? If the answer is, “Well maybe just a little”, the projected outcome is eyeliner being thrown at said man, and tears.” Understood consequences. So what does the man implement, after his pause? “No dear, it is perfect. Just perfect”.

A calm ending. Just 23 hours and 50 seconds more to survive yet another day.